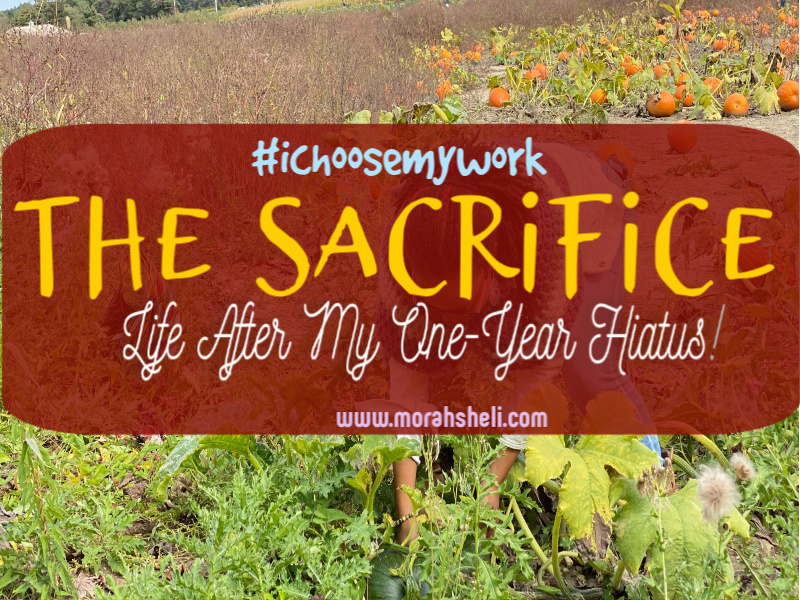 In my last post, I mentioned that harvest time is fall’s main event. We’re all familiar with harvest-like mantras. You know the ones that read…

It is very easy to become so fixated on the bounty that we lose sight of the labor. Though there are several types of labor, I want to specifically focus on one—sacrifice.

As a good friend of mine has taught me,

“Jae, you get to choose what you sacrifice; but not that you have to sacrifice.”

He is exactly right.

The Universe is ordered in a way where we Mortals must make decisions. To do so, sacrifices are made for we cannot have it all at once at the very same time. To say yes here is to also say no elsewhere. So much so, that even no decision is still a decision.

To “decide” originates from one Latin prefix, de-, meaning “off” and one Latin root word meaning “to cut.” Together, the word means “to cut off.” By definition, when we decide—one item, one thought, or one person/people is being chosen and at the same all others are being cut off.

The word “sacrifice” has a similar meaning though originally it was understood as giving an offering or giving up something (usually a life) to a deity as an act of propitiation or homage. Over time, modern thinkers understand sacrifice as the act of giving up one thing for another.

To put it plainly and poetically—something’s gotta give.

When we know that all things cannot always be acquired by the same person/people, we understand that choices must be made. In our right to choose, we have decisions to make and with those decisions, comes sacrifice. A self-governed person accepts his or her responsibility to choose, makes the best decisions for all involved, considers the harvest (what is worked for and ideally gained) and the sacrifices (what is intentionally or inevitably being given up) for his or her best success.

Yes, harvest time is a wondrous, joyous season. Yet, it is important to remember that sacrifice is a necessary act that is also due. Sacrifice is also type of transaction. The choice is left to us to properly judge, weigh, and decide.

In my preceding post to this one, I discussed the pain born in the loss of labor. Before we re-imagine a reality, we’ve all experienced a time or two before, I want you to visualize what we commonly refer to as “The Process.”

Imbalance (The Impact) serve as our Dis-alignment. We know that something has happened because we have experienced it, felt it. It interrupts our current alignment and gives us great contrast. This is usually the unwanted, unfavorable event that zooms into one single moment we can undoubtedly pinpoint. It is the end (of whatever) as we knew it.

Healing (The Process) serves as our Re-alignment. We consent to treatment realizing that intentional work is required to order chaos. It is not mere happenstance. This is usually the Recovery Period that we undergo to reset and re-calibrate, and it takes a great deal of time.

Balance (The Return) serves as our Alignment. We re-enter to the same or similar territory where we experienced the un-welcomed event. It’s the only way to know that the cut is closed, the wound is healed, and the immunity is stronger, more life-preserving. It is the beginning (of whatever) as we re-navigate it.

We’re all guilty of playing the timeline from the first moment until the imbalance moment searching, questioning, processing. Yet, no matter how long we remain there, it cannot change the current reality. And within the constant timelining, that great beast continually stares you down.

Then, you realize it’s time to strive with it.

People hold all sorts of conclusions on who Jacob wrestled with in Peniel as told in Genesis 32:22-32.

Was it his subconscious?

Was it an ancestor?

Was it a divine Being?

I do not think we have to name it to get the point. What matters is that he strove with whatever force was seemingly opposing him.

Did he strive in vain?

Did he walkaway undefeated though there was no obvious win? Or was there?

Before the wrestling match, Jacob feared what could happen when he encountered his brother. Then, he faced the beast or maybe he faced his fear (or whatever you want to call it) and his worries were all for naught. Perhaps, he did overcome.

To overcome is to have struggled against something and be deemed the victor.

But, is that enough?

The victory is apparently a single moment much like the single moment that knocked the wind from your sail and left you lying on the floor. Do those single moments define us? I am not sure. But those moments certainly act as vehicle to transition us for the next phase.

Why bother with the Recovery Period?

Sure, to “get over it” as they say. You owe yourself more than that, though. We’re not going through trials to report “over it” at the end. Seriously ask yourself – why engage the middle phase? Why endure weeks, months, maybe even years of on-the-ground personal and reflective work?

The value of the Recovery Phase is that you become more experienced. #noshortcuts #doyourwork

Not in the cliché sense of folk declaring “I’m wiser, I’m stronger” either. Sometimes people claim wisdom or strength just because they’ve been through hell. That is not enough. Experiencing the hardship alone does not offer valuable transformation. In fact, many times it yields quite the opposite. People who experience hardship without going through the “healing process” are often more diseased and cancerous with their avoidance, denial, cynicism, bitterness, and more.

Rehabilitation does not teach you (vain) proclamations. It teaches you how to cope with your unwanted event, how to manage yourself to attract what you want and resist what you do not want, and how to re-enter an environment more equipped than times previous because well… you’ve been here before!

And we Mortals thrive very well in familiar territory.

The point and the process is to return to the environment. In laymen terms:

Ready for the gag?

In this life, there are always trade-offs. Decisions. Sacrifices.

One of my favorite movies is Not So Easily Broken. When I share this, most people think I’m a faith-based fan with a bleeding heart for romance and redemption; but this is not why. I enjoy the film because it does not under-deliver on The Process.

It explores in depth the pain (a strained relationship) and the trauma (the accident and familial abuse), the healing (the rounds of physical therapy and marital emotional support and adjustment), and the re-entry (returning to daily life and trying again at love and relationship). It’s one of the few (Black) films where the creators demonstrate characters doing the real work with the sacrifice of the harvest and also the harvest born in the sacrifice.

Because that’s the Journey.

Now, imagine it with me. Ready?

This is the thing you thought would never happen to you. Or maybe you just cannot believe that it happened to you. The thing that hit you with the—This Is Your Life Now. That thing. Did you re-feel it?

That pit in your belly?

That denial in your heart?

That slap in your face?

That cotton in your mouth?

That gasp in your breath?

It seems that all your cerebral activity is bombarded with that one event, that one day, that one time, that one person.

You have a choice to make—which also means you have a transaction to tender.

Did you decide what to gain and what to give up? Did you properly weigh? Did you choose what offered the most good for all intended and affected?

You cannot consume or store the entire harvest. It’s just not the order of the Universe. What you can do is: maintain your control (if you choose to), retain your self-governance (if you chose to), and make your own sacrifice (if you choose to); but whether you do or not the Universe will receive its payment. I have found that it is less costly to manage yourself. Did you? For you either pay now or pay later. But either way…you pay.

What’s the risk assigned to choices and sacrifice?

You can never know what the choice will fully yield before you choose it.

Once you make that choice, you will never know what life looks without it.

That’s the burn. Damn. I feel that one each time. You felt it too, huh?

It is uncomfortable to experience imbalance.

It is uncomfortable to leave the Recovery Phase too.

But, you do not truly know how “good” your recovery work is until you venture off to re-enter the environment.

I’ve reaped the harvest; but all of it I could not keep.

So, I’ve sacrificed much. But only what I have wanted or what was necessary for me to have what it is that I say I want. (That’s another burn for another time.)

And here I go again….ready and returning.

At about 100 days from Spring (a true new year), the Rebirth Season begins. I’ll be back then to share more life after my hiatus!