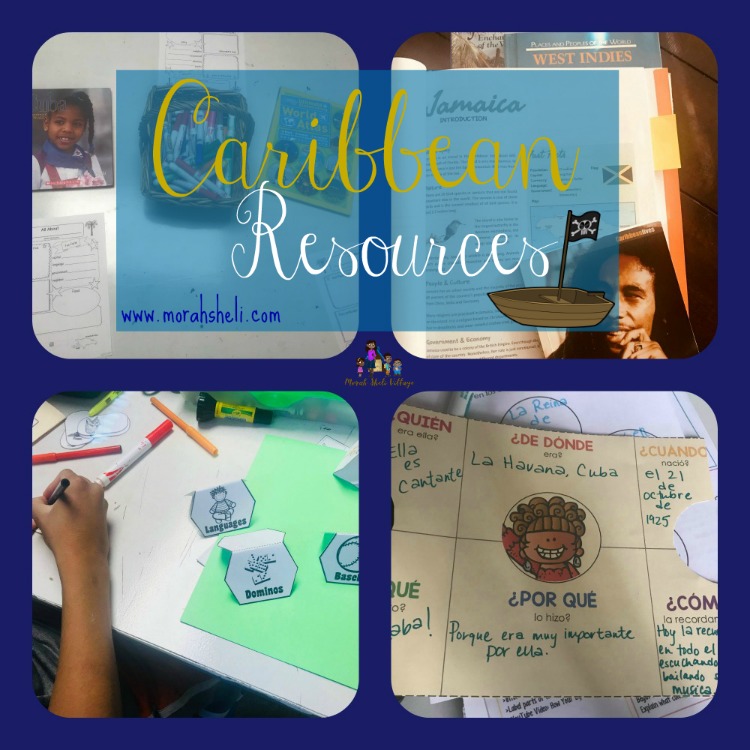 If you recall my Central American Resources post, we have a three-year world history plan. Today, I am sharing what we used while studying the Caribbean/West Indies. I could not find any one item that covered all the island I wanted to expose my sons too; so I hodge-podged a few TpT units and created everything else in between.

Before we began our island-by-island study, we learned about Caribbean geography. I use the top-down philosophy when teaching big-picture ideas, so in terms of geography, I wanted to give them an overview on how the Caribbean islands were grouped. Using a laminated wall map of the North America, I circled (dry erase marker) the Greater Antilles, the Lesser Antilles, and the Bahamas. They understood these terms as the 3 groups of the Caribbean.  Then, I taught them which islands were apart of each group. I used Caribbean: Our Island Neighbors to introduce lots of basic geography and information about the West Indies. (Later, as we studied specific islands, I used other portions of this unit as well.)

The Greater Antilles are the larger island in the Caribbean Sea. There are six large islands: Cuba, Hispaniola (Dominican Republic and Haiti), Jamaica, Puerto Rico, and the Cayman Islands. For each of these islands we spent at least 2 weeks learning the facts and content mentioned above as well as majors historical events. I used the Caribbean Activities for Third Grade to really dive into these islands. ( I modified this unit a little for my Sixth Grader.) The informational text packets allowed them to learn so much about each island including landscape, climate, places to visit, food, culture, governments, economy, flag, and maps. We really loved the learning charts in the packet and for each island I had them review what they had learned using the graphic organizer / newspaper template.

After we finished learning about the Greater Antilles, I assigned a map project! They did a great job!

We read some keys portions of this sacred text while studying Jamaica & Rastafarianism.

We used this book to learn more about Haiti’s fight for freedom and L’ouverture.

A great bio to read while studying Puerto Rico!

Once we finished Puerto Rico, I also read “What Is the Bermuda Triangle?” as a read-aloud.

This atlas has the nation-islands in the Greater Antilles. See the atlas below for all Caribbean islands, including the Lesser Antilles.

Like the Greater Antilles, the Lesser Antilles are a group in the Caribbean Sea. The form an island arch between the Greater Antilles and the northeastern tip of South America. It was hard enough finding resources to teach Central America/Latin America as whole, but the Lesser Antilles was another challenge. It’s as if when people here about Latin America & the Caribbean only 4-6 main nations are of importance. Sadly, the Caribbean and many Black-populated islands are often forgotten. Some very popular curricula (I’ll leave names out) really surprised me with its under-representation of Latin America. So, I am going to share a simple plan and some resources I used to teach the Lesser Antilles islands. (Technically, the island nations in the Caribbean are considered “North America.” If you are teaching American students (North Americans), it is a good idea to teach them all of the nations, islands, and territories that belong to the continent they are from.)

Decide if you want to teach these island in order of their geographical location or by dependency. If geographical, start with the Virgin Islands (British or U.S.) and work you way around the island arch until you reach Aruba, Bonaire, and Curacao. If dependency/colonization, group the island nations by each country and teach them a set at a time. Because of the way I teach history in general and because of they way they learned American History (which was a segue way into Latin American History), I chose to teach according to dependency/colonization. Also, they are likely able to compare and contrast better seeing the very similar culture and language in countries that share the same colonizer. All the islands in the Lesser Antilles are not dependent, but I started with these first.

I used two references to help us learn more about the West Indies at-large, but specifically the Lesser Antilles islands since very little resources exist.

2.  Caribbean School Atlas ~ An atlas that encourages awareness of the WHOLE Caribbean region with detailed maps of ALL independent and major dependent territories. With this text, we focused heavily on geographical skills, mapping, climate, environment and population. I purchased this atlas from Hodder Curriculum (a UK-based company.)

Watch this video to build your own Lesser Antilles folder (which I used with these two book above) to record information on each island.

Leaving the Cayman Islands (British) in the Greater Antilles, we started with the British-occupied islands first. We spent lots of time learning about Great Britain when we studied Jamaica. Since the language is also English, we opted for the UK first and we threw in the US Virgin Islands alongside the UK Virgin Islands.

Next up, we studied French-occupied islands. We spent a great deal of time learning about France when we studied Haiti. Since I have one son who is very interested in French/Creole culture, we paused for a minute to complete a lapbook on France and learn the French alphabet.

After France, we studied the Netherlands-occupied  islands. When I last taught American History, they learned about Dutch’s involvement in the Transatlantic Slave Trade. However, we did not go into much detail on who they were and where they are from. So, I took this time this year to teach them about the Netherlands and how this people group ended up all the way in the Caribbean Sea. (Since we have this geography coloring book, we focused on the Netherlands page to gain basic information.)

Moving along, we began learning about the independent island nations in the Lesser Antilles. I chose to teach them according to their geographical location (again following the island arch), beginning with Bahamas. (The list below is in alphabetical order.)

Below, you will also find other Caribbean tales, poetry, biographies, books, and literature I used to expose West Indian culture.

These tales are from America, West Indies, and Africa, so it took care of everything we are and are studying. There are three tales from the West Indies and my sons enjoyed them. Anytime we study lands, I plan to read tales/folklore/myths/legends, etc to my students. It helps them learn more about the culture and understand that most of the American stories they read about are versions from other cultures, and not original.

Caribbean-themed poetry written by Ms. Greenfield herself!! Mr. Amos does a good job painting Caribbean scenes for children as well.

We LOVE this anthology! It was such a treat to read a Caribbean tale each day of our studies. My sons began to appreciate the trickster themes and really looked forward to figuring our how the plot would twist and how the trick would play out in the tale. Hands down, this is our favorite readers. The culture and kid-friendly content is amazing!

A Caribbean twist on a Cinderella-type story!

A Caribbean twist on the Creation story!

A Caribbean twist on “Stone Soup!”

Thank you for reading! We enjoyed our stay and studies in Caribbean!